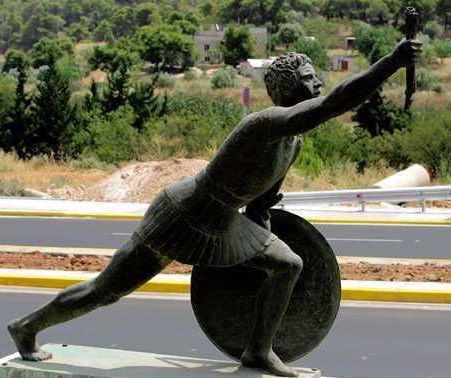 A->B, for chaosflöte and AIYA, was originally created for and premiered at the 2019 White Pulse Marathon of experimental music, whose motto cheekily quips, "a toast to Pheidippides." He is said to have distanced a total of 25 miles by foot to deliver the news of Greek victory in the battle of Marathon. I incorporate the form of the famous statue of Pheiddipides in the reactive visuals of this set, and play with the act of going "from a to b."

Audio feedback hotspots occupy the left and right edges of the stage, creating a palpable sonic tension while traversing from one side to the other. Hidden behind the news of battle victory is the violent undercurrent of its cost, as 'personified' by AIYA, the machine improvisor. Echoing explosions and raspy vocalizations mark the final climax of the set, amplified by continuous feedback before fading away into the realm of myth and legend.

AIYA is a machine improviser, designed for the Chaosflöte and MIDI instruments. When activated, it spins textures and melodies that are derived from what I play -- an algorithmic counterpoint based on 10 simple rules. Its simplicity is contrasted with the complexity of its musical output. The goal of its development is to dissect the often intuitive, yet opaque nature of decision-making in improvised music. Does the improvising musician also operate on sets of rules, validations, and discouragements, even if consciously, her behavior appears to be natural, intuitive, and human? What kinds of conscious and unconscious decisions does the musician make while improvising? If we attempt to replicate this complex system into electronics, can we approach the "organic" aesthetic of human improvisation?

AIYA is derived from the Chinese expression "aiya..!" which expresses a mixture of frustration and surprise. Such is my experience with creating this machine, where unexpected behaviors of the machine continually challenge - and therefore develop - my improvisation practice.